Prime minister Narendra modi has introduced top schemes which are helpful to one and all. 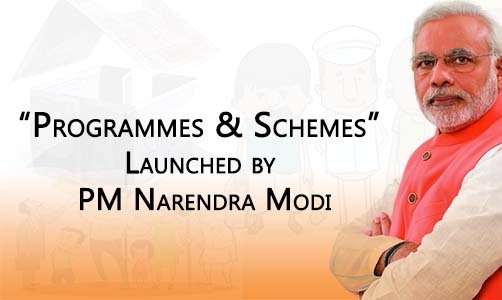 With a caption of “ek kadam swacchta ki aur” this was started on october 2nd 2014. The idea behind this scheme is to fulfill the dreams of Gandhi with mission of clean and hygienic India. Initially the campaign started with cinema celebs, political leaders. Over all the whole country took over this scheme of cleanliness.

This scheme was started in 25 September 2014. The main focus of this scheme is to encourage domestic and big MNC’s to manufacture their products in India in 25 sectors. Likewise there will be a growth in skill and employment sector.

“save girl child and educate girl child” an initiative by Prime Minister Narendra Modi with 100 crore on 22 January 2015 in 100 districts. The motto of this scheme is to save and educate girl, eradicate selective sex abortion, increasing the ratio of girl child

This is one of the health schemes which came into force in 25 December 2014. Scheme provides vaccination and immunisation to pregnant women and children below 2 years of age which prevents 7 types of diseases namely diphtheria, whooping cough (Pertussis), tetanus, polio, tuberculosis, measles and hepatitis B. 201 districts have selected under this scheme out of which 50% has been covered.

This scheme came into action on 14th november 2014 with a mission in providing clean and hygienic toilets, bathrooms, anganwadi, food and drinking water. The sanitation awareness program  spread all over india especially in schools, colleges and anganwadis.

This scheme aims at providing continuous power supply to rural India with an investment of 756 billion rupees.  Giving adequate power supply to agriculture and round the clock supply to domestic rural households. This scheme is the replacement of  Rajiv Gandhi Grameen Vidyutikaran Yojana(RGGVY)

Skill india scheme came into action on 16 July 2015. The main aim of skill India is to train 40 crore citizens in industrial training, with certification, where training is completely free

An initiative by Prime Minister on June 25, 2015 with  a total of ₹98,000 crore. Main aim behind this scheme is to select 100 cities from each state and making them smarter with all the infrastructure, power and water supply, IT connectivity, advance technologies in e-governance. The Smart City conversion completes by 2022

Keeping in mind decreasing and maintaining power consumption, this scheme came into force. This scheme mainly deals with Distribution of led bulbs with 4.77 crore units to households and replacing of old bulbs with 5.51 lakh unit at street lights.

It is a top scheme in providing financial assistance to SC, ST and women for self employment and entrepreneurship. Under this scheme government sanctions from 10 lakh to 1 crore rupees of loan at low rates of interest.